Pomegranate – Superfood – Even in a glass by itself. 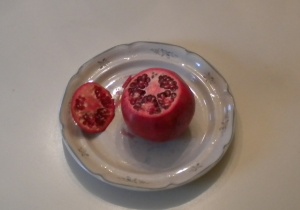 (Yes, that’s a corny title. 🙂   I love the title of another article I came across on the web:  “Male and Pregnant?  Stay away from Pomegranates!”  I suppose that if you find yourself in that category you may want to avoid them, but for the rest of us this fruit is truly an amazing substance. It is one of those rare cases where overindulgence in tasty treats is actually a good thing.  We may throw the title of “superfood” around too much now a days, but pomegranate truly provides health benefits beyond those of most other foods.  Here is just a taste:

The best way I’ve found for getting at the seeds is to do this:  First cut through the skin in little sections kind of like the pattern on a basketball.  After you cut the end off (about an inch) you can pull it apart like a peeled orange at these cuts, and the seeds pull right away from the husk.  You can eat them right there or put the pile in a dish for later.  These are like tasty little health capsules in a bowl.  The perfect recipe for any anti-ager! 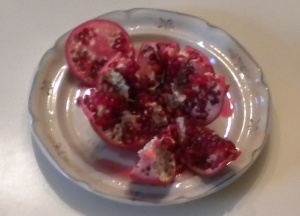