Beer and Other Healthy Barbecue Tricks 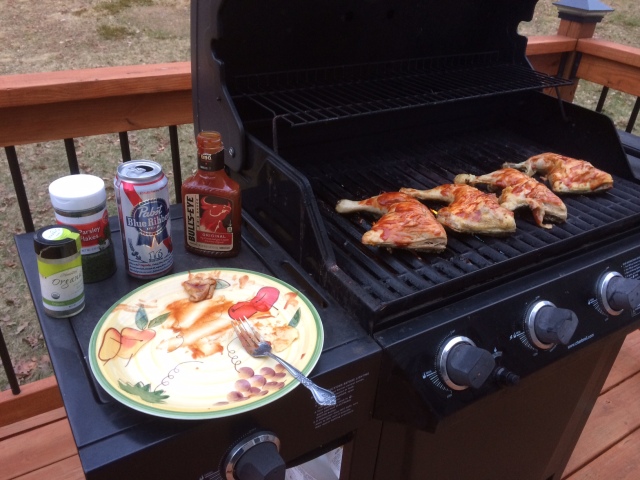 Seems like a particularly long time in coming this year, but just around the corner lies sun, beaches, barbecues, outdoor sports and just simple basic enjoyment.  Two of our favorites – beer and cooking on the grill –  often receive bad press for healthful reasons, but there are ways to convert those exquisite pasttimes into truly healthful ones.  You can have your beer and drink it too…..

Overcooked blackened charred meats have been  implicated in studies as promoters of diseases like cancer.  The uncontrolled high temperatures and damaged meat results in the  creation of harmful chemicals such as HCA’s (heterocyclic amines) and PAH’s (polycyclic aromatic hydrocarbons), as well as increasing levels of AGE’s which are a hallmark of accelerated aging.  Are we paying a hefty price for our pleasure?  I don’t think so.  These consequences are primarily related to the way we cook, much more  than what we are preparing.

It’s the scorching high temperatures, the dusty, charred meat surface and the flaming gasses created by the dripping fat that are the culprits – but these are easily mitigated.

Any master chef knows to control flame ups, and he knows that meat tastes better cooked slowly and turned frequently.  He also might be aware that sacrificing a little of his favorite beer (particularly dark ones) as a beer marinade has been show in  fairly recent studies (here and here) to lower the levels of those PAH’s and HCA’s while also contributing some antioxidant protection in the process.  You can later sprinkle on some herbs as well as barbecue sauce that add even further benefits – as long as these are not burnt.

One good trick when grilling chicken is to parboil it a bit longer.  This limits the chance of overdoing or singeing it on the grill.  (cooking outdoors is for taste, not for convenience or economy)

I do the bulk of the grilling of chicken legs and breasts on the bony underside, limiting the burning and charring of the top meat surface.  This  preserves the tasty fats and the skin on that meaty side.  Just remember to keep that flame in it’s place.

For steaks and chops, frequent turning at low heat is the healthiest.  This also gives you more chances to apply abundant sauces and spices to really ramp up the flavor.  Remember that you are also pouring on healthy protection with those bastes…

We hear from the health experts that we should limit our grilling to once a week or less.  I don’t know about you, but that just doesn’t cut it for me. I find barbecues to be one of the greatest pleasures of summer, even on a week night.  But by taking a few smart steps it can still fit in quite nicely with your health enhancement lifestyle……..